Hi everyone! I’ve got something special today – a mani swap! The super awesome @fishnails on Instagram and I decided to do a Valentine’s Day-themed mani swap (each person comes up with a nail art design and then copies the other person’s design) and it was so fun! I had never done a mani swap before, and now I’m absolutely stoked to do more in the future! 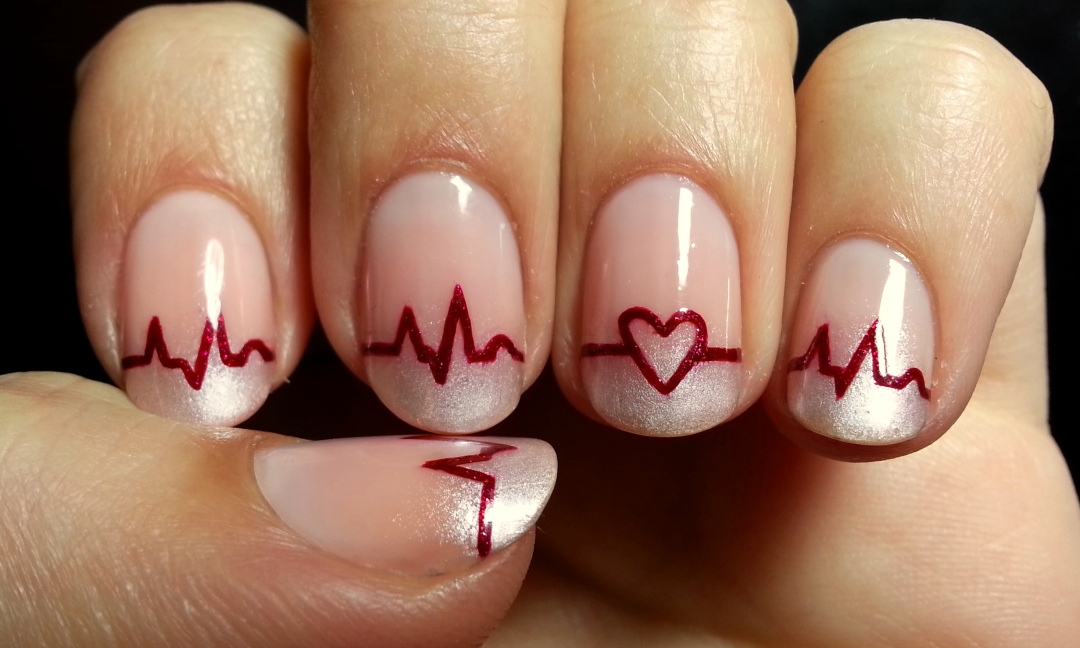 Since this is really two nail art designs, I’m going to divide the mani swap up into two posts! This one will be about my design for the swap, which features a glittery, electrocardiogram-like heart rhythm on top of a subtle gradient French tip. While it may not be the most original design (there are a lot of heartbeat nail designs on the internet), I really like the heartbeat pattern for Valentine’s Day because it’s a bit offbeat and nerdy, but still relevant. Of course, I couldn’t waste an opportunity to talk about science on my blog, so I have a small bit at the end about the parts of a “heartbeat” on an electrocardiogram (also known as an EKG or ECG). Before I move on to technique, here’s the pic of the mani swap! AAHHH SO CUTE!!! 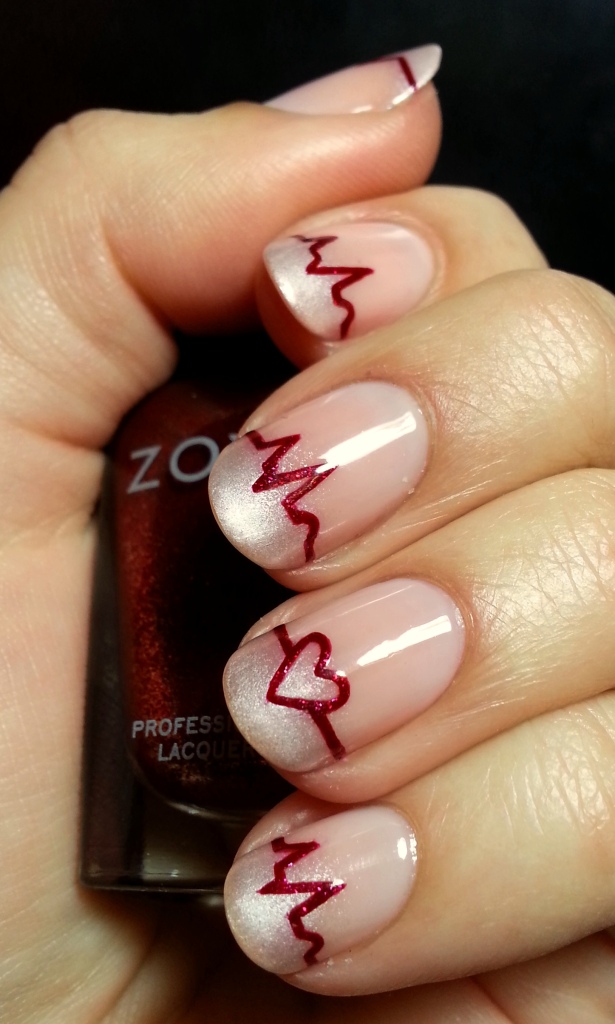 While I knew for sure that I wanted to have the heartbeat as part of the design, I wasn’t too sure about the background. Originally, I designed it with a harsh French tip, but it looked too jagged and distracting so I toned it down to a French tip gradient. Much better! To start, I painted my nails with two coats of L’Oreal Wishful Pinking (best French manicure pink EVER!!!), and then lightly sponged on a gradient at the tips using Wet n Wild Megalast Sophisticated Lady (light rosy frost). I had to be careful not to go overboard with the sponging, since the frosty polish was pretty opaque.

After that, it was just a matter of putting in the heartbeat using Julep Lupita (pinky red creme) and a striping brush! I tried as best as I could to get the pattern of ups and downs right, but this heartbeat probably has an arrhythmia somewhere (other than the accent nail, that is). On the accent nail, I put a small heart shape into the line instead of the heartbeat pattern; this is something I saw online and thought was cute. In retrospect, this step probably wasn’t necessary because the sparkly polish I put on top of Julep Lupita was opaque enough on its own (I didn’t think it would be).

Following the heartbeat creation with Julep Lupita, I reinforced the line with Zoya Sarah – a similarly-colored microglitter polish – to add some sparkle and bring out the line from the base. And done!

How cute is this? And also Valentine’s Day-appropriate! To me, though, I enjoy the science-y vibe it gives off while still being very adorable nail art.

What science? Well, I couldn’t do this manicure without telling you all about how to read an ECG! Those ups and downs of the ECG trace are far from random – they’re essential to understanding someone’s heart rhythm, and to diagnosing any potential problems they may have.

Chambers of the Heart and the Cardiac Cycle

Image by user ZooFari from http://en.wikipedia.org/wiki/File:Heart_diagram-en.svg

Here’s a picture of the heart! It has four chambers through which blood flows; in this paragraph, I underlined the chambers to make it obvious. First, the heart receives blood from the body’s periphery that is “deoxygenated” (lacking in oxygen) because the oxygen was removed and consumed by the body’s tissues. This blood enters from the vena cava into the right atrium, and then is pumped into the right ventricle. The right ventricle pumps out the deoxygenated blood out of the heart through the pulmonary arteries and into the lungs. The lungs infuse the blood with oxygen, and then the blood returns to the heart.

Conducting System of the Heart 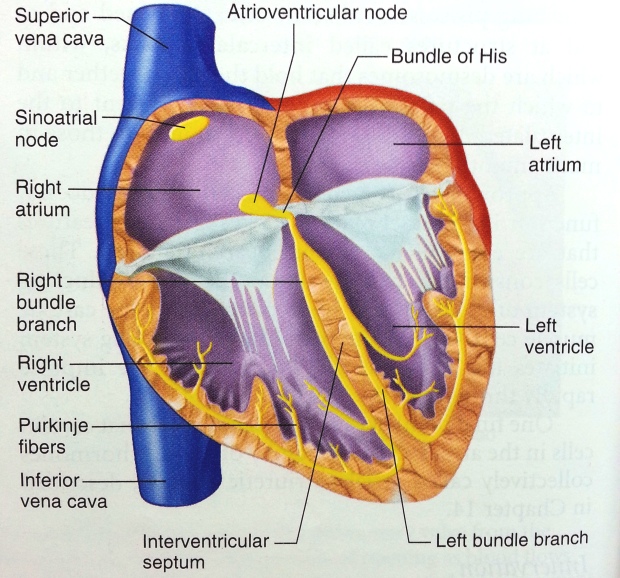 Like all other cells in the body, the cells that make up the electrical conducting system of the heart are surrounded by a membrane that has a negative electrical charge to it. This means the membrane is in its normal “polarized” state. Certain charged particles entering or leaving these cells can change the charge of the membrane; if the charge becomes zero (neither negative nor positive), then the membrane is “depolarized”. When this happens, the conducting cells transmit a signal to adjacent cells, causing a sequence of cells to transmit the signal. In the case of the heart, the end result of this signal is that certain parts of the heart muscles contract. When the signal has finished, the cell membranes “repolarize” and get back their negative charge.

The stimulation of the heart contractions begin at the sinoatrial node near the top of the heart, which acts as the “pacemaker” for the entire heart (it sets your heart rate). Once the cells of the sinoatrial node depolarize, a signal  passes downwards to the atrioventricular node, which is right at the place where the atria (plural of atrium) meet the ventricles. The signal then divides between the left and right branches of the heart to get all the way down to the bottom of the heart. Finally, the signal goes around the bottoms of the ventricles through the Purkinje fibers. Overall, this means that both atria receive the signal first and at the same time. Subsequently, the ventricles receive the signal, and also receive it simultaneously.

How does this all relate to what you see on an electrocardiogram? An ECG represents the electrical signaling pattern that goes on in the heart over time; each deflection in the line represents a change in the polarization of the heart from the base level.

I hope you’ve liked my post, and learned a little about ECGs! Sorry again about not blogging for ages – things have been busy and it’s been hard to keep on top of things. Anyways, stay tuned for the next post about the mani swap and thanks for reading 🙂

3 thoughts on “Valentine’s Day Mani Swap with @fishnails on Instagram – My Design!”